In Memory of
Claud
Ferguson
1935 - 2019
Click above to light a memorial candle.
Memorial Candle Tribute From
Jackson's Funeral Homes Inc.
"We are honored to provide this Book of Memories to the family."
View full message >>>
Send Flowers
Plant a Tree In Memory of Your Loved One
Click Here
Menu 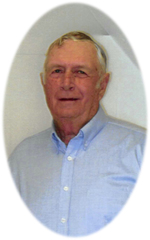 Mr. Claud E. Ferguson of Tuckerman, Arkansas, departed this life on Monday, August 19, 2019, at the age of 84. He was born June 17, 1935, near Clover Bend, Arkansas, the son of William Marion and Shellie (Sims) Ferguson.
Mr. Claud Ferguson married Miss Judy Gosser on January 16, 1960, and together they spent nearly 60 years raising their family.
Mr. Ferguson was a United States Marine Corp veteran, and a 1956 graduate of Tuckerman High School. He then retired from Ever Corporation, formerly known as Victor Metal, after 42 years of service. He enjoyed hunting, running his beagles, working on small engines. To many Tuckerman locals, Mr. Ferguson was known as The Lawnmower Man, due to his ability to repair mowers of any kind. This kind man never met a stranger, and loved to talk to people.
Mr. Ferguson’s family was a center of his life. He could often be found sitting on his corner of the couch listening to his children and grandchildren tell stories of their day.
His was preceded in death by one brother, Joe Ferguson; two sisters, Lillie Mae Norris and Mary Ferguson; a daughter-in-law, Marjorie Ferguson; and his parents.
Mr. Ferguson is survived by his wife, Judy Ferguson of the home; three sons, Paul Ferguson of Tuckerman, David Ferguson and wife, Rinetta, of Charlotte, and Mark Ferguson and special friend, Susan Davis, of Tuckerman; two daughters, Donna Larue and husband, James, of Pottsville, and Melissa Ward and husband, David, of Charlotte; one brother-in-law, Herbert Gosser and wife, Sherry, of Fifty-Six; eight grandchildren; eight great-grandchildren; and a lifetime of friends.
Friends may visit at the funeral home, Wednesday, 6:00-8:00 p.m. Funeral services are 10:00 a.m. Thursday at Tuckerman Faith Assembly of God, with interment at Dowell’s Chapel Cemetery.
Those honored to serve as pallbearers are Johnny Haskett, Cullen Mears, Robert Slagley, Robby Slagley, Joe Alexander, and Zach Franks.
Arrangements by Jackson’s Newport Funeral Home.