In Memory of
Harold "Buddy" Lloyd
Rutledge
1952 - 2019
Click above to light a memorial candle.
Memorial Candle Tribute From
Jackson's Funeral Homes Inc.
"We are honored to provide this Book of Memories to the family."
View full message >>>
Send Flowers
Plant a Tree In Memory of Your Loved One
Click Here
Menu 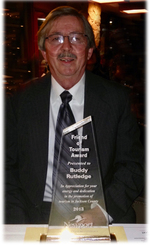 Mr. Harold L. “Buddy” Rutledge of Newport, Arkansas, departed this life on Saturday, August 17, 2019, at the age of 67. He was born February 17, 1952 in Newport, the only son of Harold Gilbert Rutledge and Vernadene (McDoniel) Rutledge.
Buddy was a Master Electrician and HVAC Tech. He worked alongside his father many years at Rutledge Electric Company. After his father’s retirement, Buddy continued running the family business, which has been in operation now over 50 years.
He enjoyed watching NASCAR, and collecting Coca-Cola and Newport memorabilia. A 1970 graduate of Newport High School, Buddy loved his community and was always willing to volunteer as needed. He was a member of the Jackson County Historical Society, and the Newport Christmas Decorating Committee. Buddy served his community as a volunteer fireman, and participated in Newport New Vision. He was honored by his community for his efforts in 2013, when he was awarded the Friends of Tourism Award, and again in 2016, when he served as Grand Marshall of the Newport Christmas Parade.
He was a member of the Holden Avenue Church of Christ.
Buddy was preceded in death by his father, Harold Rutledge in 2016.
He is survived by one son, Chris Rutledge of Newport; his mother, Vernadene (McDoniel) Rutledge of Newport; three sisters, Dianne Rutledge Tims of Mobile, Alabama, Kay Rutledge Johns and husband, Rickey, of North Little Rock, and Debbie Victory and husband, Gary, of Olyphant; several nieces, nephews, and a lifetime of friends.
Friends may visit at the funeral home Wednesday beginning at 12:30 p.m. Funeral services will follow at 2:00 p.m. at Jackson’s Newport Funeral Home Chapel with Mr. Bill Arnold officiating. Interment will be in Sandhill Cemetery.
Those honored to serve as pallbearers are Mickey Doyle, David Churchman, John Brownd, Eddie Carpenter, Cledy Pollard, and Danny Doyle. The Newport High School Class of 1970 will serve as honorary pallbearers.
Arrangements by Jackson’s Newport Funeral Home.
www.jacksonsfh.com