In Memory of
Shelley
Evins
1942 - 2019
Click above to light a memorial candle.
Memorial Candle Tribute From
Jackson's Funeral Homes Inc.
"We are honored to provide this Book of Memories to the family."
View full message >>>
Send Flowers
Plant a Tree In Memory of Your Loved One
Click Here
Menu 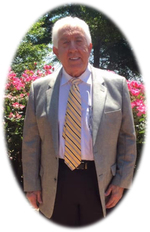 Mr. Shelley loved and enjoyed working.  He was currently a valuable Holden-Conner Associate serving over 30 years.  Following graduation from Newport High School in 1960, he attended Georgia Technical School of Engineering.  Moving home to help his family following a severe accident by his father, he and a friend, Jimmy London, became the protégées of Mr. Fred Williams and Mr. Jeff Ellis of the Arkansas Soil and Water Conservation.  Under Mr. Williams and Mr. Ellis, Mr. Shelley learned the very fine art and exacting science of engineering.  These skills and his incredible work ethic made Mr. Shelley one of the most sought after advisors in Jackson County, serving as either President of, member, or advisor to every levee district in Jackson and surrounding counties.

Through the years, he worked for Dale Baughn Construction and the owner of Delta Land Forming.

Mr. Shelley’s first love was his family, especially his children and his granddaughter, who the very mention of, would make his face light up brighter than the sun.   He attended Holden Avenue Church of Christ with his children when they were young.

Mr. Shelley enjoyed Westerns, listening to Merle Haggard, and joking with people.  And, was always known to have a calculator at hand.

He was preceded in death by two sons, Kevin Douglas Evins on June 24, 1995, and Grant Kendall Evins on January 4, 2014; one brother, C.A. Evins; a special cousin, Hayley Evins Ozier; and his parents.

To leave a message of condolence, light a memorial candle, or sign the guest register, please visit our website at www.jacksonsfh.com