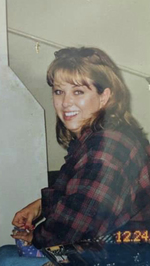 Mrs. Connie Louise (Shown) Brock of Swifton, Arkansas, departed this life on Friday August 2, 2019 at the age of 54. She was born November 20, 1964 in Jonesboro, Arkansas, the daughter of Dan Shown and Janie (Gentry) Melton.
Mrs. Brock was a homemaker and loved working in her flower beds and raising a garden. She loved her animals, fishing and the outdoors. She never met a stranger and always put others first, even before herself. Her greatest love was spending time with her family, especially her grandchildren. Everyone always said she had the most infectious smile that could brighten anyone’s day.
Mrs. Brock was preceded in death by her mother.
Mrs. Brock is survived by husband of 23 years, Ronald Eugene Brock, of the home; her father, Dan Shown, of Tuckerman; three daughters, Heather Dennis and husband, Kagan of Fisher, Stefanie Beard and husband, Brad of Swifton and Megan McKewen and husband, Clay of Dewitt; one brother Charles Shown and wife, Gwen of Newport; three sisters, Debbie Parks and husband, John of Swifton, Sharon Shown and Kristy Melton both of Swifton; seven grandchildren, Connor Beard, Caden Arnold, Andrew Nichols, Kymber Arnold and Talun Dennis, Layton Mckewen, Cread Mckewwn; her step father Carl Ray Melton; many nieces, nephews and a lifetime of friends.

To light a memorial candle, leave a condolence message, or view the guestbook, please visit our website at www.jacksonsfh.com