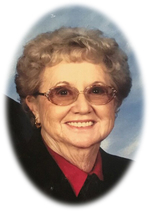 Mrs. Betty Jean (Moore) Harris of Newport, Arkansas, departed this life on Saturday, July 13, 2019, at the age of 85. She was born October 27, 1933 in the Remmel Community, the daughter of Calvin and Ina (Simons) Moore.
On July 15, 1949, Miss Betty Jean Moore was wed to Mr. Billy D. Harris, and together they spent 70 years, and raised three children.
Mrs. Harris was both a waitress and a homemaker. Though she worked at Kelly’s Grill for many years, her true joy was raising her family. Mrs. Harris enjoyed bowling and playing softball in her younger years, and liked working in her flower beds. She was a member of Immanuel Baptist Church.
Mrs. Harris was preceded in death by one sister, Mabel Honey; and her parents.
She is survived by her husband, of 70 years, Billy D. Harris of the home; one son, Rickey Neal Harris and wife, Kathy, of Bradford; two daughters, Patricia Brantley of St. Louis, Missouri, and Linda Gail Blackwell and husband, John, of Beaumont, Texas; one sister, Jetta Hodge of Newport; five grandchildren, Shannon Brantley of St. Louis, Chad Harris of Newport, Jennifer Brickner of St. Louis, Josh Harris and Terri of Newport, and Zach Harris and wife, Courtney, of Jonesboro; five great-grandchildren, Ally, Jake, Aubrey, Harper, and Hayes; and her special caregiver, JoAnn Mullins and her husband, Albert.
Friends may visit at the funeral home, Tuesday, 12:30-2:00 p.m. Funeral services are 2:00 p.m. Tuesday, at Jackson’s Newport Funeral Home Chapel, with interment at Watson Cemetery.
Those honored to serve as pallbearers are Chad Harris, Josh Harris, Zach Harris, Shane Davis, Scott Jones, and Don Southerland.
Arrangements by Jackson’s Newport Funeral Home.