In Memory of
Jeffrey
Steward
1996 - 2019
Click above to light a memorial candle.
Memorial Candle Tribute From
Jackson's Funeral Homes Inc.
"We are honored to provide this Book of Memories to the family."
View full message >>>
Send Flowers
Plant a Tree In Memory of Your Loved One
Click Here
Menu 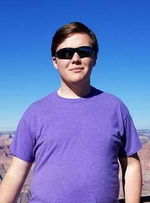 Mr. Jeffrey Harrison Steward of Oil Trough, Arkansas, departed this life on Saturday, April 20, 2019 at the age of 22. Jeffrey was born April 29, 1996 in Newport, the son of William Martin and Andrea (Jeffrey) Steward.
He was a 2014 graduate of Cedar Ridge High School, and a Vocal Performance Major at Arkansas State University. Jeffrey was a talented singer, violinist, and violist, who loved collaborating with others to make music. He was chosen as the recipient of the Julia Lansford Scholarship on two different occasions, once selflessly gifting it to another student whom he felt had greater need than he.
Jeffrey was two time State Quiz Bowl Champion and MVP. He had an adventuresome soul, and enjoyed all things in nature, traveling, going on adventures, and spending time with his friends.
Jeffrey was an active member of St. Mark’s Episcopal Church in Jonesboro.
He is survived by his parents, William and Andrea Steward of Oil Trough; one brother, Shelby Steward of Oil Trough; his grandfathers, Bill Steward of Macks, Arkansas, and Harold Jeffrey of Ward, Arkansas; two uncles, Daniel Steward and wife, Wendy, of Yuma, Arizona, and Harold Jeffrey and partner, Patty, of Woodlawn, Arkansas; as well as a host of cousins, aunts, uncles, and friends.
Friends may visit at Jackson’s Newport Funeral Home, Thursday, 6:00-9:00 p.m. Funeral services are 2:00 p.m. Saturday at Newport First United Methodist Church, with interment following in Coffeyville Cemetery.
Those honored to serve as pallbearers are Bryce Cash, Jakobe Hardee, Drew Warren, Jaelyn Jones, David Norris, and David Stroud. Honorary pallbearers are members of the First United Methodist Church Chancel Choir, and St. Mark’s Chancel Choir.
In lieu of flowers, the family requests memorials be made to ASU- Music Department, P.O. Box 779, State University, AR 72467, Attn: Myrika Kyriokos.
Arrangements by Jackson’s Newport Funeral Home.