In Memory of
Lohnes
Tiner
1932 - 2019
Click above to light a memorial candle.
Memorial Candle Tribute From
Jackson's Funeral Homes Inc.
"We are honored to provide this Book of Memories to the family."
View full message >>>
Memorial Candle Tribute From
Charlotte Hearn Alexander, fellow member of LR Centennial DAR
"Nicci, Wishing you peace to bring you comfort, courage to face the days ahead an"
View full message >>>
Send Flowers
Plant a Tree In Memory of Your Loved One
Click Here
Menu 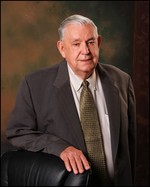 Mr. Lohnes Thomas Tiner Sr., 87, of Harrisburg departed this life on Thursday, April 18, 2019 in Little Rock. He was born January 21, 1932 in Balch, Arkansas, the son of Theo and Corine (Tanksley) Tiner. He grew up on a farm in Poinsett County, where his family raised rice, cotton, and soybeans.
Lohnes graduated from Weiner High School in 1949. After spending the summer farming with his dad, he joined the Air Force in February 1950, prior to the start of the Korean War. Midway through his military career, he become a flight engineer, which enabled him to fly to all 50 states as well as Europe.
Lohnes attended the University of Arkansas and graduated with a law degree in 1960. After passing the bar exam, he opened an office in Harrisburg and continued his law practice until his retirement in January 2018. Lohnes was fortunate to have found a career that he both excelled in and enjoyed. His specialty was criminal defense. He loved a good fight in the courtroom, and after a win he would often tell his daughter “Your old Dad has still got it”. Lohnes also enjoyed mentoring younger attorneys in the area. He was a member of the Arkansas Bar Association where he was recognized for 50 years of practice in 2010. He was also a member of the Poinsett County Bar Association, the Arkansas Trial Lawyers Association, and the Arkansas Association of Criminal Defense Lawyers. In 2005, he was recognized as the Legal Aid Volunteer Attorney of the Year in Poinsett County.
Lohnes enjoyed hunting, especially quail hunting and fox hunting. He also enjoyed travelling with his wife Margaret (Gray) Tiner and with his grandkids. In his later years, he enjoyed supervising his garden and handing out his “garden goodies” to neighbors and friends. His church was also a very important part of his life. Lohnes and Margaret were charter members of Cornerstone Baptist Church in Harrisburg.
He was proceeded in death by his parents, his wife Margaret, an infant son Stephen Wayne Tiner, and a son Tommy Tiner. He is survived by his daughter Nicci Tiner of Little Rock; one brother, Leon Tiner of Palm Coast, Florida; one sister, Loretta Eckert of Brenham, Texas; three grandchildren, Shelley Tiner, Amy (Jonathan) Boyd, and Will Tiner all of Newport; and four great-grandchildren, Tripp Tiner, Sam Tiner, Bernice Boyd, and Georgie Boyd.
Visitation will be Monday, April 22, 2019 from 6:00-8:00 PM at Jackson’s Harrisburg Funeral Home. Brother Jason Goad will conduct the service on Tuesday, April 23, 2019 at 10:00 AM in the Funeral Home Chapel. Mike Beeson, Wayne Davis, Chet Dunlap, Frankie Lindsey, Larry Mills, and Jake Harper will serve as Pallbearers. Kara Byers, Clifford Clover, Jarrett Cobb, Larry Jennings, Rice VanAusdale, and Tommy Wright will serve as Honorary Pallbearers. Interment will be in Harrisburg Memorial Park Cemetery. Memorials may be made to: Cornerstone Baptist Church, 1501 N. Illinois St., Harrisburg, AR 72432. Arrangements are by Jackson’s Harrisburg Funeral Home.