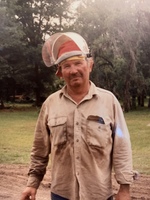 Mr. Conrad Crabtree of Rosie, Arkansas, departed this life on Friday, April 19, 2019, at the age of 83. He was born November 11, 1935 in the Meadow Lake Community, the son of Arvel and June (Pelley) Crabtree.
Mr. Crabtree was a retired pipeliner, who enjoyed gardening, fishing, and raising cattle. During his time off pipelining, he especially enjoyed farming and driving a tractor.
Mr. Crabtree was preceded in death by his parents; and one brother, Max Crabtree.
He is survived by one son, Mike Crabtree of Rosie; one daughter, Conda Edwards of Rosie; one granddaughter, Katelin Fuller and husband, Nathan, of Rosie; two great-grandchildren, Laivey and Everly Fuller; three sisters, JoAnn Stewart of Southside, Harriett Hawkins of Oil Trough, and Becky Engles of Newark; and a lifetime of friends.
Graveside services are 10:00 a.m. Monday at Maple Springs Cemetery.
Those honored to serve as pallbearers are Chad Crabtree, Corey Engles, Tony Hawkins, Tim Stewart, Cole Crabtree, and Cade Crabtree. Honorary pallbearers are Nathan Fuller, Blake Elumbaugh, Lance Wyatt, Todd Engles, Jamie Goynes, and Bob Crabtree.
Arrangements by Jackson’s Newport Funeral Home.