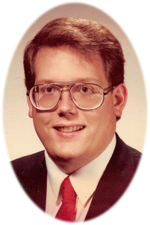 Mr. Craig Owen Hicks of Houston, Texas, departed this life on Monday, April 15, 2019, at the age of 55. He was born August 6, 1963 in Albuquerque, New Mexico, the son of Henry Owen and Jean Doris (Moldan) Hicks.
Craig earned his Masters Degree in Teaching from Westminster College in Fulton, Missouri. He spent over 20 years teaching Latin and Economics in the Houston area, and was well loved by his students and his family.
Craig enjoyed reading, traveling, and working with computers. He was a member of the Church of Christ.
Craig was preceded in death by his father, Henry Owen Hicks.
He is survived by his mother, Jean Doris (Moldan) Hicks of Newport, Arkansas; one sister, Barbara Ann Chaplain of Newport; and one nephew, James Henry Chaplain and wife, Karen; and one great-nephew, Mason Chaplain.
Graveside services are 11:00 a.m. Saturday at Coffeyville Cemetery with Mr. Gary Lawson officiating.
Arrangements by Jackson’s Newport Funeral Home.