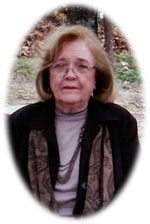 Mrs. Lola Pauline (Fisher) Sutherland of the Remmel Community, departed this life on Sunday, April 14, 2019 at the age of 79. She was born February 28, 1940 in Newport, the daughter of Ralph and Agnes Rutledge Fisher. Miss Lola Pauline Fisher married Mr. Aaron Odell Sutherland on December 21, 1956, and together they spent 43 years and raised three children.
Mrs. Sutherland was a graduate of the White River Vo-Tech in Newport, and worked at the Jackson County Courthouse many years. She enjoyed working in her yard, tending her flowers, and was an avid reader. She especially loved spending time with her family.
Mrs. Sutherland was a member of the Amagon Church of Christ.
She was preceded in death by her husband, Aaron Sutherland; four brothers, Marcus Fisher, David Fisher, Ralph Fisher, Jr., and Hugh Fisher; and her parents.
Mrs. Sutherland is survived by one son, Doug Sutherland of Remmel Community; two daughters, Deana Sutherland Tims and husband, Eddie, of Newport, and Rhonda Sutherland Mears and husband, Rick, of Jonesboro; one grandchild, Nick Mahan of Jonesboro; one brother, Harold Dean Fisher of Newport; four sisters, Delois Honey of Newport, Janice Gates of Newport, Sue Wright of Quitman, and Lutricia Lucas of South Bend, Indiana; many nieces, nephews, and a lifetime of friends.
Friends may visit at the funeral home beginning at 12:30 p.m. Tuesday, April 16, 2019. Funeral services will follow at Jackson’s Newport Funeral Home Chapel at 2:00 p.m. Interment will be in Remmel-McCall Cemetery.
Those honored to serve as pallbearers are Nick Mahan, Rick Mears, Frank Wright, Michael Honey, Shane Felts, Marty Nance, and Eddie Tims.
Arrangements by Jackson’s Newport Funeral Home.