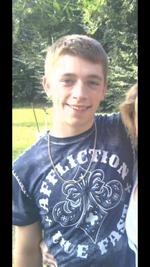 Brett Michael Smith, 22, of Harrisburg departed this life Friday, September 21, 2018 in Harrisburg. He was born January 5, 1996 in Jonesboro, Arkansas the son of Parker Smith and Donna Fowler. Brett Michael is a graduate of Harrisburg High School and a member of Living Waters PCG Church in Tyronza, Arkansas. He enjoyed fishing, hunting, motorcycles, and spending time with family and friends. Brett Michael was preceded in death by his paternal grandfather, Michael Lynn Smith and maternal grandfather, Jerry Brown. He is survived by his father, Parker and fiancé Laura Smith of Harrisburg, his mother, Donna Fowler of Water Valley, Mississippi, Dad, John Brown of Turrell, one brother, Legend Brown, one sister, River Brown all of Turrell, paternal grandparents, Nancy and husband Zeryl Clark of Mckenzie, Tennessee, maternal grandmother, June Brown of Turrell, Arkansas, and girlfriend, Kori Weeks of Harrisburg. Pastor Gwen Hooker will conduct the service and these men will serve as active pallbearers: Dylan Combs, Chase Barnes, Devin Laden, Trevor Hamrick, Joshua Fitzgearld, and Anthony Hopper. Visitation will be Saturday, September 29, 2018 at 1:00 until service time 2:00 P. M. at Jackson’s Funeral Home Chapel. Interment will be in Harrisburg Memorial Park Cemetery. Arrangements are by Jackson’s Harrisburg Funeral Home.