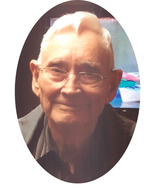 Bro. James C. Toney of Newport, Arkansas died Tuesday June 5, 2018, at the age of 88. He was born January 13, 1930 the son of Bruce and Mae (Jenkins) Toney.
Bro. James C. Toney, beloved husband, father, and friend, devoted his adult life to God. His most important job was his service to the Lord. He volunteered at Newport Hospital and was a service to the communities in which he lived. He was pastor at Bethel Baptist Church, Harrisburg, AR and First Church of the Nazarene, Newport, AR. He served the Lord as a deacon for many years, as well as a Sunday School Teacher. He continued serving the Lord even to the end at Central Baptist Church, Newport, AR. His concern was always for the needs and comfort of those around him, but his primary concern was for the spiritual welfare of all that he met. His life was exemplary of his Christian faith.
His second most important job was his wife of 62 years, Maude “Tori”
(Meredith) Toney and nine children (the kids). He was a faithful, loving and caring husband and father. He held different jobs throughout his lifetime including service with the United States Army, farming, factory work and finally, retired from Harwick Chemical Company in Wynne, AR.
Bro. Toney was preceded in death by, his parents; one son, Larry B. Toney; and one brother, Gordon Toney.
Bro. Toney is survived by, his wife, Maude M. “Tori” (Meredith) Toney, of the home; one son, Gary Toney and wife, Anita of Harrisburg; seven daughters, Marjorie Hamrick and husband, Joe of Harrisburg, Mary Brown of Newport, Ellen Killion and husband, Gordon, Jr. of Charleston, West Virginia, Elaine Doyle and husband, David of Cherry Valley, Susan Gustke of Newport, Becky Sisco and husband, Dennis of Springdale, and Gail Betts and husband, Michael of Greenbriar; two sisters, Ada Ruth Holley of Memphis, Tennessee and Cora Steen of Tuscumbia, Alabama; twenty one grandchildren, several great grandchildren and several nieces, nephews and a lifetime of friends.
Services are 10:00 a.m. Saturday at Jackson’s Newport Funeral Home. Interment: Tyre Cemetery. Friends may visit at the funeral home Friday 6:00-8:00 p.m.
Those honored to serve as pallbearers are Brent Clayton, Gary Walker Gary Russell, and grandsons Austin Betts, Hunter Betts, Tanner Sisco, and Addison Brown. Honorary pallbearers are grandsons, Marcus Brown, James Killion and Quinton Drum.
Memorials may be made to the Central Baptist Newport Youth Fund.


To light a memorial candle, leave a condolence message, or view the guestbook, please visit our website at www.jacksonsfh.com