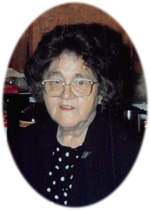 Mrs. Vina Mae (Grigsby) Carpenter of Newport, Arkansas, departed this life on Wednesday, January 10, 2018 at the age of 92. She was born December 20, 1925 in Bethesda, Arkansas, the daughter of Rexford and Ola (Tate) Grigsby.
Mrs. Carpenter was a homemaker, and a member of Diaz Baptist Church. She enjoyed gardening and cooking. Her family remembers her biscuits and gravy, chicken and dumplings, and peach cobbler as the best they had ever had. Mrs. Carpenter had a generous heart. She would give you anything she had if you had a need. Her greatest joy in life was having the opportunity to help raise her grandchildren.
Mrs. Carpenter was preceded in death by her husband of 55 years, Kenneth Odell Carpenter; one daughter, Helen Pauline Carpenter; one son-in-law, Bill Owen; three brothers, Rex Grigsby, Pawnee Grigsby, and Royce Grigsby; and one sister, Geraldean Barner.
She is survived by one son, Eddie Carpenter and wife, Debbie, of Newport; two daughters, Linda Owen of Fort Payne, Alabama, and Diane George and husband, Gary, of Newport; one brother, Earl Dean Grigsby of Houston, Texas; twelve grandchildren; many great and great-great grandchildren; many nieces, nephews, and a lifetime of friends.
Friends may visit at the funeral home Saturday, 9:30-11:00 a.m. Funeral services will immediately follow at Jackson’s Newport Funeral Home Chapel with Bro. Emmitt Campbell officiating. Interment will be in Walnut Grove Cemetery.
Those honored to serve as pallbearers are Gary Dean George, Shawn Haigwood, Stacey Sullivan, Jeremy Williams, Mike Ward, Hayden Haigwood, Josh Loftin, Eric Wood, Eddit Sitzer, Stephen McCullar, and Sonny Sullivan. Honorary pallbearers are the Staff of Lindley Healthcare.