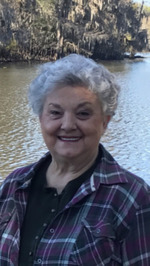 Mrs. Lena Faye Doyle of Little Rock, Arkansas, departed this life on Friday, January 5, 2018, at the age of 78. She was born March 21, 1939, the daughter of Malcolm Earnest “Bud” Wycough and Shelba Faye Hughes Garrison.
Mrs. Doyle was a 1956 graduate of Newport, High School, and was of the Baptist belief. She had worked as a bank teller at Merchant and Planters, Boatman’s and Arkansas Federal Bank. She had many hobbies which included boating, visiting with her family in Texas and crafting. She was a great cook and enjoyed working with crafts. She was a big Elvis fan. She will be remembered for her unconditional love and her love of life.
She was preceded in death by her parents, first husband, Donald Hagan McIntosh; second husband, Charles Eugene Doyle; one brother, James William “Billy” Garrison; and one sister, Anna Mae Cheshier.
Mrs. Doyle is survived by two sons, Rocky Don McIntosh and wife, Donna, of Batesville and Earnest Keith McIntosh and wife, Pam, of Longview, TX; two sisters, Buddie Jean Everett of Little Rock and Ginger Paula Martin of Little Rock.; seven grandchildren, Jennifer Gillespie and husband, Steven, Roxanna McIntosh, Hagen McIntosh, Drew McIntosh, Rachel Withers and husband, Jeff, Molly Rauschuber and husband, Tyler, and Ashlee Jones; twelve great grandchildren; and several nephews.
Memorial services will be held 2:00 p.m. Tuesday at Jackson’s Newport Funeral Home Chapel. Friends may visit at the funeral home Tuesday 1:00 p.m. until service time.